As I look forward to the third Indigenous New England Conference tomorrow at UNH, I'm especially interested in speaking with Paul Pouliot, Sagamo of the Cowasuck Band of the Pennacook Abenaki people, based in Alton, NH.  From 1993 until quite recently, the band was regularly (i.e., quarterly) publishing Aln8bak (Abenaki Indian) News.  Like many community newsletters, it includes notices of social events, obituaries, updates on tribal decisions, plus cultural features like book reviews, language lessons, and pieces written by tribal members.

In New England and beyond, tribal newsletters are an important source of history and literature.  When I was compiling Dawnland Voices: Writing of Indigenous New England (forthcoming from the U of Nebraska Press), many of the tribal editors mined their store of newsletters for poetry, creative nonfiction, letters, recipes, and more.  Cheryl Watching Crow Stedtler (Nipmuc), started Nipmucspohke in 1994, just a year after the first issue of Aln8bak News.  Many regional tribal publications are much older.  The first was probably the short-lived Narragansett Dawn, published in 1935-36 by Princess Red Wing.  In Maine, the Wabanaki people had a variety of newsletters and newspapers, from the Aroostook Indian, run off a mimeograph machine in Houlton, Maine, during the 1990s, to The Wabanaki Alliance, a full-sized newspaper that run during the 1970s and 80s.

Most of these are not yet digitized (an especial shame in the case of the Maine newspapers).  Even when they are available online, as in the case of the Narragansett Dawn or Nipmucspohke, they're usually only scanned and uploaded in pdf, which means they're not searchable, sometimes not very readable, and not really suited to long-term preservation and archiving.  In the case of the Aln8bak News, issues from 2003 to 2007 are posted on the band's website.  They contain information on Abenaki history--including the band's reorganization in the 1990s, its maintenance of connections to relatives outside of New England, its outreach to prisoners and activism within the state of New Hampshire--that are simply not readily found anywhere else.  As such, they're great teaching tools and important historical documents.

If the Cowasuck Band of the Pennacook Abenaki People--and other tribal entities--feel it is appropriate, the work of transcribing and indexing these kinds of newsletters would be an excellent, long-term project for university students.  Over time, we could build a large, visible archive of regional indigenous periodical history. 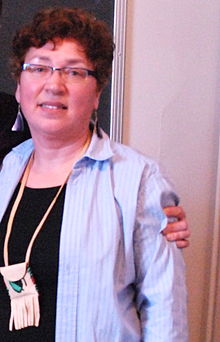