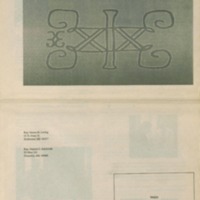 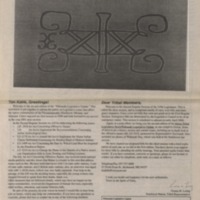 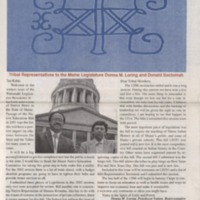 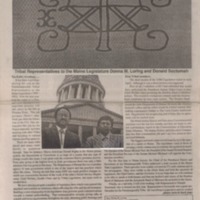 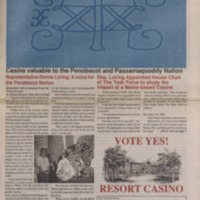 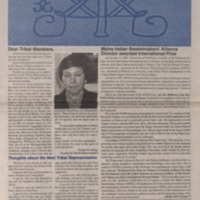 The Penobscot tribe sent its first representatives to the Maine state legislature in 1823, and the Passamaquoddy sent their first representative in 1842. The Wabanaki Legislative News is one product of this long and rich history. Donna Loring (Penobscot) and Donald Soctomah (Passamaquoddy) produced the newsletter annually between 1999 and 2004, as a way of informing tribal members about the state legislature’s work. They had help from Representative Verdi Tripp (D Topsham), who formatted and printed the paper, sending it out to all to all Penobscot and Passamaquoddy tribal members. Though Tripp gave Loring and Soctomah the mailing lists and copies of the newsletters, and Loring hoped her successor would continue writing it, The Wabanaki Legislative News ended with her term in office.

This newsletter was the first of its kind. Much like no other state had representation for Native tribes, no other newsletter reported directly to the tribes about the legislation affecting them. The Wabanaki Legislative News kept the Penobscot and Passamaquoddy tribes informed and aware of the state’s current legislative actions, and the legislation’s implications.

As (nonvoting) representatives, Loring and Soctomah were able to introduce some of this legislation. Loring proposed and passed LD-291, An Act to Require Teaching Maine Native American History and Culture in Maine’s Schools (Adams), while Soctomah crafted LD-2418, An Act Concerning Offensive Names. Both are discussed in multiple editions of the newsletter. The Wabanaki Legislative News also reported on tribal protest actions, including the 2002 March on the Statehouse for Water Protection, when tribal members walked 39 miles to deliver court-ordered papers to the paper companies that were polluting Maine’s waters. The newsletter also reported on citizens’ initiatives, like one on the November 2003 ballot that would have allowed tribal casinos in Maine to support the tribes economically. Loring and Soctomah gave their opinions of the ballot question how it would impact the tribe, and what action needed to be taken. They also included the input and opinions of tribal members.

As Loring explains in her memoir of her time in the state legislature, In the Shadow of the Eagle, Maine passed a bill in 1999 allowing tribal representation to sponsor their own bills. In the early decades of the 21st century, however, relations between the tribes and the state deteriorated (Moretto), especially under Governor Paul LePage (Cousins). In May of 2015, the Passamaquoddy and Penobscot tribal representatives walked out of the chamber, and as of May 2017, they have not returned. When the representatives left, they stated that they would not allow the state to take away their rights as self-governing tribes. Tribal leaders noted that this move is highly symbolic, and final (Woodard).

The newsletters here were scanned and provided by the Maine Women Writers Collection at the University of New England, which houses the Donna M. Loring papers, and are used with permission.

Cousins, Christopher. “How Relations between Maine and Its Native American Tribes Have Gotten so Bad.” Bangor Daily News, March 5, 2017.

Loring, Donna. In the Shadow of the Eagle. Gardiner, ME: Tilbury House, 2008.