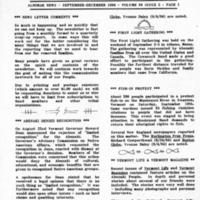 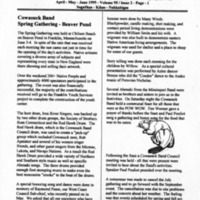 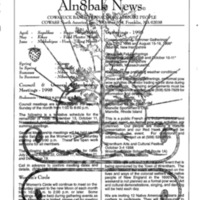 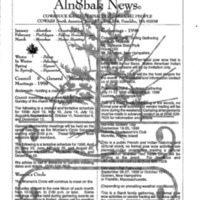 Aln8bak News was a quarterly newsletter that discussed cultural, historical, and contemporary information regarding the Cowasuck Band of the Pennacook Abenaki. It was started in 1993 by Sag8mo Paul Pouliot.

Initially the newsletter was called Aln8ba8dwa National News (“Aln8ba8dwa” or “Alnôbaôdwa” means “Abenaki speaking”). It included community-related information such as updates on governance issues, notices of social events, and obituaries. Band members were encouraged to contribute their own writings including stories, poems, and opinions; and announcements of events such as births, deaths, graduations, and promotions. The newsletter aimed to be a “family news network.” It also included Band history, genealogy, language lessons, recipes, plant and animal studies, books reviews, and writings by Band members from across the country.

When Aln8bak News began, in 1993, the Band’s headquarters was in Franklin, Massachusetts. In 2008, they relocated to Alton, New Hampshire. The Band’s evolution can be discerned during the 17 years Aln8bak News ran: we see changes in topics covered, and even how the newsletter’s aesthetic transformed. The first issue (January 1993) was just four pages, with black text and a single clip art image on the last page. It covered political highlights from the year before and an interband meeting early in 1993. It also included a brief obituary section, a notice about upcoming powwows, a language section, a book review, a treasurer’s report, a list of what sections would be included in future newsletters, and a message from Council Chief Paul Pouliot.

The last issue (October-December 2010), published on the Cowasuck Band of the Pennacook Abenaki website, was fifteen pages, embedded with color images and hyperlinks. The scope of topics covered in this issue was much larger than that of the first issue 17 years before. This issue included sections on tribal action and government, the future of the newsletter, upcoming events and programs, information about an Abenaki language camp, and a prison outreach program. It included a crossword puzzle, a word search, movie and book reviews, a medicine bag, an animal tracks section, a recipe, Abenaki language lessons, and other information.

The four issues featured here are from the early years of Aln8bak News. These samples were selected because they demonstrate how tenaciously Native communities must work for the recognition of their sovereignty, and what challenges such processes present.

In August of 1994, the state of Vermont denied “limited recognition” to the Abenaki. That same year, the East and West Councils of the Cowasuck Band made the decision to begin the federal recognition process, knowing it would be arduous and resource-intensive. Toward this end, the September-December 1994 newsletter calls for all tribal members to submit any historical records, such as collected oral stories, traditions, photographs, Bible entries, birth certificates, and other records.

By the time the April-June 1995 newsletter was published, the conversation regarding recognition and identity has shifted. The issue explains how the federal recognition process requirements have affected Band membership review and approval, sometimes creating internal divisions, and consequently how the federal process has affected morale. At this time, the Cowasuck Band has begun to promote the idea of establishing a land base, which could be used for “cultural and spiritual events; and for educational, environmental, recreational, and repatriation programs.” Hoping for a thickly wooded site--one with pines, and a natural water source—the Band established a land fund, and called for a tangible plan for the land base and its uses.

Frustration with the federal government’s process escalated over time. An editorial in the January-March 1998 issue, titled “Cowboys & Indians & Indians,” explains how government proposals and programs redefine and constrict racial categories, particularly through blood quantum requirements. The editorial argues, “The net result being sought is to eliminate sovereign status, take back lands for government development (minerals, mining, oil, lumber, waste disposal, etc.), take control of gambling, keep the remaining Indians on public welfare, and tax the tribes with business interests and those that are working.” It urges tribal members to resist such federal tactics, and work collectively and in harmony to ensure the Band’s survival well into the future.

By the April-June 1998 issue, more local issues are surfacing. There is some frustration with the Massachusetts Commission on Indian Affairs, which has experienced a transition in leadership and has been excluding the Abenaki from representation. The Band also reports plans to submit a request for tribal members to obtain eagle and other bird feathers for religious purposes, noting that, in the past tribes, non-federally recognized tribes have been denied access to feathers. In 1998, the Cowasuck Band was still pursuing federal recognition, demonstrating the lengthy nature of this process. Yet Aln8bak News illustrates how non-federally recognized tribes are treated as secondary to federally recognized tribes on a variety of matters.

After 2010, the editors explained that they would stop publishing the newsletter online due a lack of financial support from readers. The four newsletters selected here demonstrate how difficult it is for Indigenous groups, particularly in the Northeast, to gain federal and state recognition; yet they also illustrate indigenous coalition and survival. Government recognition is far from the only mechanism for validating the sovereignty and influence of Native band. Aln8bak News was a platform through which the Cowasuck Band could assert and commnicate authority, legitimacy, and influence. Although Aln8bak News is no longer published, the Cowasuck Band of the Pennacook Abenaki is still an integral part of the Northeast’s Indigenous community. The Band’s Sag8mo Paul Pouliot, and Treasurer Denise Pouliot continue to work fervently to preserve their cultural heritage, and to educate the local community. Updated information regarding the Band—and issues of Aln8bak News from 2003-2010--can be found at their website.  A full digitized run can also be found on Google Drive.