What the United States calls "Thanksgiving," indigenous people call the National Day of Mourning.  In 1970, when the state of Massachusetts invited Frank James/Wamsutta (Mashpee Wampanoag) to speak, he hit them with this:

It is with mixed emotion that I stand here to share my thoughts. This is a time of celebration for you - celebrating an anniversary of a beginning for the white man in America. A time of looking back, of reflection. It is with a heavy heart that I look back upon what happened to my People.
Even before the Pilgrims landed it was common practice for explorers to capture Indians, take them to Europe and sell them as slaves for 220 shillings apiece. The Pilgrims had hardly explored the shores of Cape Cod for four days before they had robbed the graves of my ancestors and stolen their corn and beans. Mourt's Relation describes a searching party of sixteen men. Mourt goes on to say that this party took as much of the Indians' winter provisions as they were able to carry.
Massasoit, the great Sachem of the Wampanoag, knew these facts, yet he and his People welcomed and befriended the settlers of the Plymouth Plantation. Perhaps he did this because his Tribe had been depleted by an epidemic. Or his knowledge of the harsh oncoming winter was the reason for his peaceful acceptance of these acts. This action by Massasoit was perhaps our biggest mistake. We, the Wampanoag, welcomed you, the white man, with open arms, little knowing that it was the beginning of the end; that before 50 years were to pass, the Wampanoag would no longer be a free people.
What happened in those short 50 years? What has happened in the last 300 years? History gives us facts and there were atrocities; there were broken promises--and most of these centered around land ownership. Among ourselves we understood that there were boundaries, but never before had we had to deal with fences and stone walls. But the white man had a need to prove his worth by the amount of land that he owned. Only ten years later, when the Puritans came, they treated the Wampanoag with even less kindness in converting the souls of the so-called "savages." Although the Puritans were harsh to members of their own society, the Indian was pressed between stone slabs and hanged as quickly as any other “witch.”
And so down through the years there is record after record of Indian lands taken and, in token, reservations set up for him upon which to live. The Indian, having been stripped of his power, could only stand by and watch while the white man took his land and used it for his personal gain. This the Indian could not understand; for to him, land was survival, to farm, to hunt, to be enjoyed. It was not to be abused. We see incident after incident, where the white man sought to tame the “savage” and convert him to the Christian ways of life. The early Pilgrim settlers led the Indian to believe that if he did not behave, they would dig up the ground and unleash the great epidemic again.

There's more.  James's full speech continues to be widely circulated on the internet, and on this day every year, the United American Indians of New England gather Native people together at Coles Hill, overlooking Plimoth Rock. 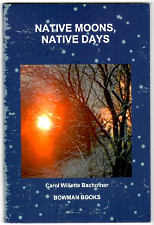