I received the letter below, with some of Doris Seale’s poems, from Judy Dow, and reprint that material here with her permission.  Judy also supplied the following biography of Doris, as well as the photographs --Cheryl Savageau, editor.

Doris Marion Seale was born in 1936 in Brattleboro, VT, and attended Simmons College in Boston, graduating with a degree in Library Science. She worked in the Children's Department of the Brookline Public Library in Brookline, Massachusetts, for 45 years. She joined the library staff in 1958, and was appointed Supervisor of Children's Services in 1969, a position she held until her retirement in 2003.

Seale co-founded Oyate, an organization working to see that the lives and histories of Native Americans are portrayed with honesty and integrity, ensuring that it is widely known that the stories of Native Americans belong to them. The reference books she co-authored--A Broken Flute and Through Indian Eyes--have been used by librarians and teachers across North America. A Broken Flute was the winner of a 2006 American Book Award and a 2006 Skipping Stones Honor Award.

Seale wrote two books of poetry, Blood Salt and Ghost Dance; and contributed works of poetry to several anthologies including the book The Multicolored Mirror: Cultural Substance in Literature for Children and Young Adults.

In 2001, she received the American Library Association's Equality Award, which recognized her tireless championship of equality throughout her extensive and distinguished professional career. This award acknowledged her leadership efforts toward overcoming Native American stereotypes and for giving Native Americans a visible presence in the library and beyond.

Her tireless efforts as a cultural educator and activist facilitated positive changes in the way Native Americans are viewed by others and in the way they are represented in literature.

We will miss you Doris. Your quiet demeanor and inner strength continue to inspire all who knew you. Your gifts to the Native American community will live on for many generations. Wliwni from all of us. 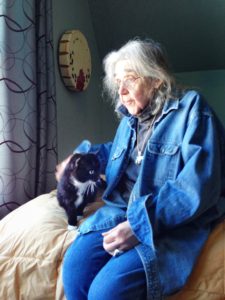 Dear Cheryl,
I've been so busy, I finally got around to picking out Doris's most recent poems that I really really like - she would write a poem for me after I brought her to the many different places and events that I was involved in. She wanted me to understand her love for poetry and she filled every free minute I had with a lovely poem. Thank you, Doris.

Cheryl, the people living at the mouth of the river for the most part are Abenaki. This is the last place the language was recorded being spoken in Vermont. The river is the Winooski River, they still live as a community, most are related, and they are always helping each other when it is needed. However, the city has raised their property taxes from approx. 2,000 to 24,000 dollars per home, they wanted to rezone it commercial property. I was working with the elders to help them fight the city. Doris came along and out popped this poem.

Mouth of the River

I was working on a presentation on Eugenics for women's month. My family was the largest targeted family and Doris's was the second largest family targeted. While collecting photos for the presentation, Doris rode around with me. Doris wrote this poem after I took her to see Kurn Hattin, the place she was institutionalized along with her two younger sisters, at the age of nine. Her life became one huge battle for survival after their mother died of polio and her father was placed in Brattleboro Retreat because he was mourning and couldn't properly care for them. Doris's baby sister was sent to a farmhouse, and became a“boy toy” passed from farmer to farmer; the sister right below her (the middle one) was also sent to a farmer’s home. She married young to get away and entered into an abusive marriage and never had a life without pain. Doris fought hard. They kept sending her out to become a mother's helper; she fought the abuse and they always sent her back to Kurn Hattin. Doris and Ginny are dead now and Blanche is unreachable (lost by the weight of history)

The stories that we told
Were not the ones we would have chosen
This is not the life that would have been
The dreams not all my own,
The tears a long grieving
Not Finished,
They reach down to us,
Tell the stories,
Do not forget

It is hard to understand such fear,
How they came to a land that was strange,
Unlike anything they had ever known,
How they saw us
Coming out of the forests
Out of the mountains
Through the tall grass that had no roads
Where they were lost.
They saw us
And we were like nothing they had ever seen before,
With our dark skin
With our feathers
With our paints,
We were the embodiment of the fear,
And that was all.
It could have been no other way,
They did not need to decide
They knew already
That we would have to die.

Doris wrote this after my battle with the Intervale compost facility, a reported green company that made compost. Actually the compost was high in arsenic, lead and carcinogens. It was a sham - greenwashing at its finest. It was a seven-year battle and Doris came to every phase with me. Finally I was able to prove they had increased the size of the compost facility from 7 acres to 26 acres without a permit and by doing so had built right over the top of several burial sites. This poem followed one of our visits.

We live in a time
Of things that walk like men
And are not
They winnow the Earth
For their harvest,
Blackened bones and rotting flesh,
Devouring the land as they go,
Footprints of fire
Darkened sun
Night at noon
none will Live
And nothing grow,
they have a name
Windigo
Windigo
Windigo
this I desire you
Be less than death
Who will not claim you,
Ashes in the wind,
A wailing in to nothingness
And gone.

Another Intervale poem: she used to make me call her when I went into the Intervale and call her when I came out. She was so afraid for my safety - she knew I was determined to protect it because this was my grandparents’ land. I had to take on Act 250, an environmental law to protect the burial sites; while we were going through the court systems she wrote this one. Her email said, "Now be careful with this stuff. I have great misgivings about sending you this one, so I'm giving you another, because this is what we need to remember, now. THIS one is for your dreams.” It’s listed below “Give me back my great Grandmother's Bones.” It did not have a title.

These are my Great Grandmother's bones.
I know they are here
Somewhere.
They are here
Returned to Earth
From where she came
To Lie in peace,
Her journey done,
Come home.
I can't find it,
I cannot find the place.
Where is she?
What have they done to the land?
I do not recognize this place
I do not recognize a thing.
What have you done?
Please,
Give me back My great Grandmother's bones.

* * * * *
In winter
We see the bones of our Mother
Stripped bare of all adornment
And they are beautiful
Beyond what I can say.

She was always writing poems for me, she wanted me to love them just as she did, and you know the trouble I always had understanding them. She was so patient with me. Over and over again, she wrote a beautiful poem for me and now I sit here crying while reading them. I think she knows that I finally get it.

Another one that she wrote for me after a four-year battle to protect a natural trail that had the cities of Winooski and Burlington on each side of it and the Winooski River running down the middle. This is the place of the oldest site in the state of Vermont that shows continuous occupation for 10,000 years. The F 18's kept leaving the airport and flying over us on one of our walks.

The birds of war have gathered
Their thunder
Over this ancient land.
Ten thousand times
The length of their existence
Standing below
Small ducks swim,
My sister walks beside me,
What is remembered
Only as a dream,
And thunder fades and only this
is real.

She so wanted to retire here and learn what she had missed all her life. This one came out like "swamp gas" as she put it after a class I did.

This water remembers
being an ocean.
This water remembers the time
When it was an inland sea,
Today after rain
Mingled with the smell
of autumn,
The high wild cry
of the geese
And sunlight turned yellow leaves
To purest gold,
Up from the lake on the wind
Comes the smell and taste of salt
These waters remember
Their own name
And ours

Cheryl, her retirement was filled with many trials and tribulations, and her beautiful poems. Please tell me that she knows that I now get it - her poems are beautiful. I get it, Doris. 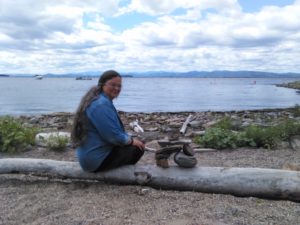 Judy Dow, an educator and basket maker who specializes in sharing indigenous knowledge with children. She received the 2004 Vermont Heritage Teacher’s Award. Judy is a Board member for OYATE and a member of the Governing Council of Gedakina as well as the founder of Saba. She has taught at schools, museums and community programs across the United States and Canada and has also presented widely on the Vermont Eugenics Survey. Judy is of Abenaki and French Canadian descent, and has made Vermont her life-long home. 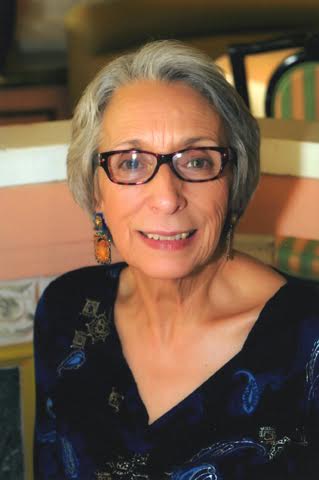 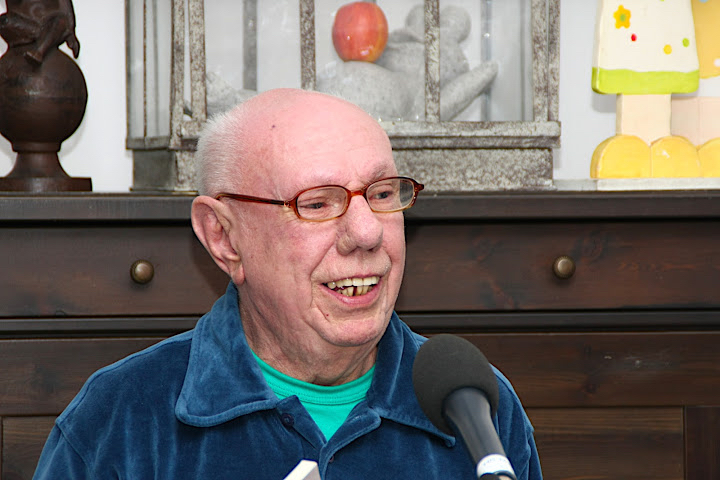