Ancients of Cahokia,
I offer these prayers
as a person busy with everyday
work—aware that you also
busied yourselves around
our beautiful bottom lands.

May we always remember
that great city first built here.

Stars still glitter famously
over St. Louis’ Delmar Loop,
lighting the way for all the artists,
master musicians and astronauts,
who firmly grasped
our ancient life-sparks passed
forward into time,
keeping alive that lure of opportunity,
heart-blood of our great polity.

II.   Han, ekta unyanpi kta ce (Yes, we’ll gather at the river)
May we come to believe
our great waters—
our many great rivers,
are animate.

Who tethered the Father of Waters,
harnessed his banks with
all kinds of rip-rap?

From as far back as a thousand years
our God partnered with these rivers
who gave us life, or sometimes
swept away our crops.

No amount of levees, pumps and gates
allows forgetfulness of ancient meander-paths.

III. Taku ota otehike hel unhipi (When the fight is fiercest in the noontide heat)

Help us to understand the world’s
dire need for Corn Mother’s plant—
to give thanks to ancestors
who preserved her seeds.

Too much heat baked our lands,
broke our backs—weary
from striking hoes
year after dry year
against stone soil.

And what are these great-wheeled beasts—
churning flood-land soils?
You say there was drought and still
the corn produced a record crop?
Why did our God hide such miracles from us?

Forgive us our dreadful judgment
allowing depredation of
our ancestors’ graves.

I am bones of a thousand years
put to rest purposefully.
Allow me the pleasure
of hearing quiet footsteps
from people offering
smokes of tobacco, sage,
cedar and sweet grass—
of storytellers recounting
how Creator’s songs came down—
the taste of new spring rain
on strawberries, red meadow clover—
hoary vervain. Keep away
the hunters’ shovels and prods—
the grave robbers’ ghoulish delight
with our skulls and pots.

Allow me more peace
for another thousand years.

Demand unending
for her offspring,
the rig squats mindlessly—
drills down with blades

Oh God of the universe,
have mercy upon
Macondo’s hemorrhage—
livelihoods lost to a poisoned Gulf.

*The oil that spilled into the Gulf of Mexico from April to July of 2010 came from a reservoir called the Macondo Prospect, located under 5.000 feet of water and 13,000 feet of rock

At Rock Port, Missouri, where rampaging
spring floods gutted Interstate 29,
we are blockaded—forced
into a circuitous detour of corn-fenced roads.
We arrive hours late in Council Bluffs,
discover the river we dodged most of the day
roiled, raced and scraped against the back doors
of our hotel and its sister casino.
A wall of concrete and protruding pumps—
unsettled our sense of protection against this super flood.

In the morning, we head west into Nebraska
take state highway 75 north. Our car crawls
at thirty-five miles an hour in a seventy-mile zone
from Ft. Calhoun through Tekamah,
through the Omaha and Winnebago reservations,
never far from the grasp of raging waters
or rotting raccoon corpses flattened down or bloated.
Miraculously the Mormon Bridge to Sioux City
is intact, but not the western lanes of Interstate 29,
its mutilated concrete remains
protruding out of dump-truck trains
heading south to some colossal graveyard.

At Elk Point, South Dakota, we part company
with the thrashing river—only to catch it again
at dusk in Gettysburg, South Dakota.
Our hotel sits on bluffs overlooking
an artificially widened—and calmer
Missouri River—fishing boat lights
dotting the basin. Walleye must be biting.

Our relatives who live across the way
on the Cheyenne River Sioux Reservation
say the river has risen five feet
and thousands of homes are gone—drowned
with little warning of the deluge—
destruction that brings to mind stories
of old Mi’kmaq monsters called Ji-bich’gam—
Horned Serpent Persons.

There is snowmelt yet to come,
a torrent that will seek
its ancient ox-bow channels,
watersheds and tributaries—
a torrent blocked
by concrete walls,
dams and levees—
caged inside of reservoirs—
harnessed or unleashed
by public servant people,
horned serpent persons.

I announce my new job
in Washington, D.C.,
and my friends’ eyes glaze with star-shine.
They rave about the city that primes careers
aligned to clout.

Inside my glass office
bordering the Potomac,
my second story cubicle
gives me a view
of Fairfax Street.
Sleek, black limousines
deliver a Who’s Who of American
firms, charities
and labor organizations.

Soon our glass office charges
with nerve-splitting voltage—
changes into a giant fishbowl.
Dark, sinuous Shark-Persons
trail around, brandishing knives.
Tails wave slowly side to side
until some luckless Goldfish-Person
crosses their path.
A swift thrash. Plunge and slash.
Ripped flesh floats away.

In retaliation, the river’s manitou—
Powa of the Potomac—
sends Whirlpool-Person
crashing through the fishbowl.

Terror-frozen, open-jawed,
I watch the vortex
suck our leaders into its maw.
Bone and muscle crunch.
Heads and arms disappear
into its hole of death.

Whether by a manitou, who took pity,
or special Mi’kmaq luck of keskamzit,
I do not know—
but I was led from that city. 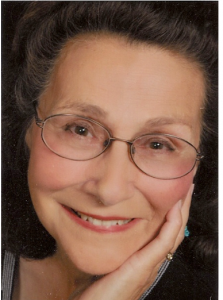 Alice Azure’s recent work has appeared in Aazhoomon: Convergence Indigenous Art Exhibition; Thinking Continental: Writing the Planet One Place at a Time: Dawnland Voices 2.0, Issue 4; Yellow Medicine Review; About Place Journal; Dawnland Voices: An Anthology of Indigenous Writing from New England; and Against the Current. She is the author of five books, her most recent, Hunger Feast, was released December of 2017. Her chapbook, Worn Cities, was selected as poetry chapbook of 2015 by Wordcraft Circle of Native Writers & Storytellers.

She lives in the St. Louis area and is a member of the St. Louis Poetry Center. More of her work can be read at her website, www.aliceazure.com. Along with many other Mi’kmaw artists, humanists, educators, lawyers, poets and writers, her work has been archived at the website Tepi’ketuek, http://mikmawarchives.ca/

*The oil that spilled into the Gulf of Mexico from April to July of 2010 came from a reservoir called the Macondo Prospect, located under 5,000 feet of water and 13,000 feet of rock.

Indigenous Editing and the Gathering Place