“Welcome to SNR—your nationwide source for morning news all across Sequoyah. I’m your host, Johnny Gilmore—”

I reached for the leftmost nob and switched off the radio. The sounds of the waves, crashing into the rocks peppering the river, overtook my ears. Without even looking I groped the air until I grasped the rim of the pack basket I had brought with me. Laying haphazardly inside were as many bottles as possible of Cola that I could fit inside. Again, without a care and a look, I pulled out a bottle. I peeled the cap off with my jackknife. The sudden, quick hiss of pressure releasing from the bottle didn’t take me by surprise, as I only sighed in response. I scratched at the warmth of my cheeks, as the morning sun was shined brightly upon my naturally tan skin. I let my raven-black locks down, allowing them to flow freely in the wind. Out of my shirt pocket I pulled my Holoplayer. On the disc there was only one song—a hit single, an old favorite. I pressed the button with the circular arrow lightly and set it down atop the now silent radio.

“Wouldn’t it be nice if we were older? Then we wouldn’t have to wait so long.”

Another glass bottle slipped through my fingers, hitting the pine wood boards that separated me from the cold water of the river. All I heard was a low ‘clink’ sound and the roll of glass, followed by a ‘kerplunk’. It didn’t matter to me, though, as I ran through the events of last night repeatedly in my head. The whole time we were together, Eli never smiled, and she always smiled. I’ve never seen her frown. Then after we both downed a chocolate sundae after our burgers, she told me—she told me—I just couldn’t believe it. We were perfect each other. I’ve known it since our first date. I guess she just couldn’t see it, or worse, never saw it at all.

“You know it’s gonna make it that much better. When we can say goodnight and stay together.”

In a matter of seconds the bottle that I just finished shattered against the large strong oak standing just a few yards away from me. After my breaths slowed to normal, and my face wasn’t as red, I saw the dozens of glass shards glitter like silver underneath the rays of sunshine that poked through the branches. ‘What was wrong with me?’ I once again asked myself. My mind, normally inquisitive and always moving in new directions, was consumed by thoughts and questions about my relationship with Eli. ‘What could I have done better?’ What did I do wrong?’ ‘What am I going to do now for our group project in Mrs. Connor’s class?’ I felt a deep, heavy weight inside that wouldn’t go away and I hated myself for it.

“Maybe if we think and wish and hope and pray, it might come true.”

The old, worn end table I dragged out here weeks ago creaked and swayed with the afternoon wind. I woke up bright and early this morning and rode my bike down to Zappo’s and bought two copies of the latest issue of ‘World’s Best: White Raven’. I thought that Eli and I could go to Jamie’s and eat eggs while reading new comics, like we used to when we first started dating. She wouldn’t answer the front door. I begged and pleaded, but no answer. I still went to Jamie’s, but alone, as one copy of the comic still sat pristine in its sleeve. I thought to myself, as I rode here to the old dock, to try and make a deal with the ancestors—maybe they would be able to help make Eli love me again. I would have given up anything if it meant she would hold me again. But then, I realized they wouldn’t approve of these feelings, of my desperation.

“You know it seems the more we talk about it, it only makes it worse to live without it.”

I tried as hard as I could to climb of the pit I felt like I was in, but I just couldn’t see the point—the reason—to keep going on like this. I could still see a fragment of the glass I had brushed into the river an hour ago, but quickly brushed the hollow thought out of my muddled head. No, I simply looked to the sky instead and watched the trees against the yellow-tinted blue sky. With my belly full of sugary soft drink and my head full of broken dreams, all I felt was a dull numbness that made me feel hollow. All I could really feel was the warmth of the sun beating against the back of my exposed neck. I knew I should have kept my hair down.

I ran out of Cola an hour ago. No matter how much I wanted to, there was nothing I could do about it, as my wallet was empty, and I couldn’t do anything about that either. The same I really could say about Eli and our relationship. She made the choice to end it between us, and I have to live with that. I have to respect that. There was nothing I could do except work to move on with my life. It’ll be painful, probably long, after a year and a half, but I have to do it. Maybe one day, maybe in college, I’ll meet someone else.

Only an hour of daylight remained before the island became shrouded in night. I turned my Holoplayer off anyhow and slipped it back into the pocket of my jacket. Reaching for the radio I turned the knob again, ready to hear a song other than Eli’s favorite. Once I turned the dial, I could see the tubes inside begin to glow warmly as the sound slowly grew louder as the radio crackled to life.

“—your nationwide source for evening news all across Sequoyah. I’m your host, Sarah Potter. Tonight I’ll be telling you that, despite all of the doom and gloom in the news these days, things are going to turn out okay.”

The air was crisp and cool, crinkling the stiff and dead, yet beauteously colorful leaves that littered the ground. There wasn’t a sound that echoed across the lake—not the honking of uncourteous geese or the chirps of ignoble frogs—but that of my old, weathered guitar that I strummed so diligently. Unnamed, unremembered melodies filled the air as if the whole world itself paid attention only to me.

But alas, it was not to be, as a dirty, rusted, red pick-up truck drove sluggishly by the maple tree I had nestled myself under. The noisy effort of a worn-out old engine drowned the music of my heavy heart, beating it back with the piercing clangs of cold, hard metal.

Fortunately, this passed, as all things do. Once again, my guitar was the only sound that enveloped my ears. Sweetly and softly, I continued my one-man concert. Yet, I noticed that I was soon not performing alone. The winds had begun to blow across the land. Trees gently rustled, leaves seldom tumbled, the pack basket swayed slowly across the rock I had set it on, for the final gifts of Autumn I had foraged all this morning kept it fairly grounded.

A droplet, cold, alone, and wet, found itself splatter against the very tip of my nose. The invisible shepherd’s crook, I could feel, was pulling me away from the stage. The pitter-patter of little water droplets soon distorted my once deep and harmonious guitar notes. In minutes, the entire symphony of nature, in which I found myself enraptured, had been overtaken by the infinitesimal, dull, and monotonous tone of rainfall.

So, I strapped my pack basket on my back and held my guitar close so the rain wouldn’t do any more damage. In solemnity I began my trek home to bring my family what I found today and, hopefully, to a nice, big bowl of moose stew.

About Sage Neptune: I was born on the Penobscot Indian Island reservation to James and Kelly Neptune. I am currently a graduate of the University of Maine in Orono, having majored in Anthropology and minored in Native Studies. I am working towards entering graduate school in order to study Archaic-era traditions we see in Maine’s archaeological record. A pursuit inspired by my late father’s work as curator of the Penobscot Nation Museum and my Auntie Neana’s work bringing our ancestors back home. 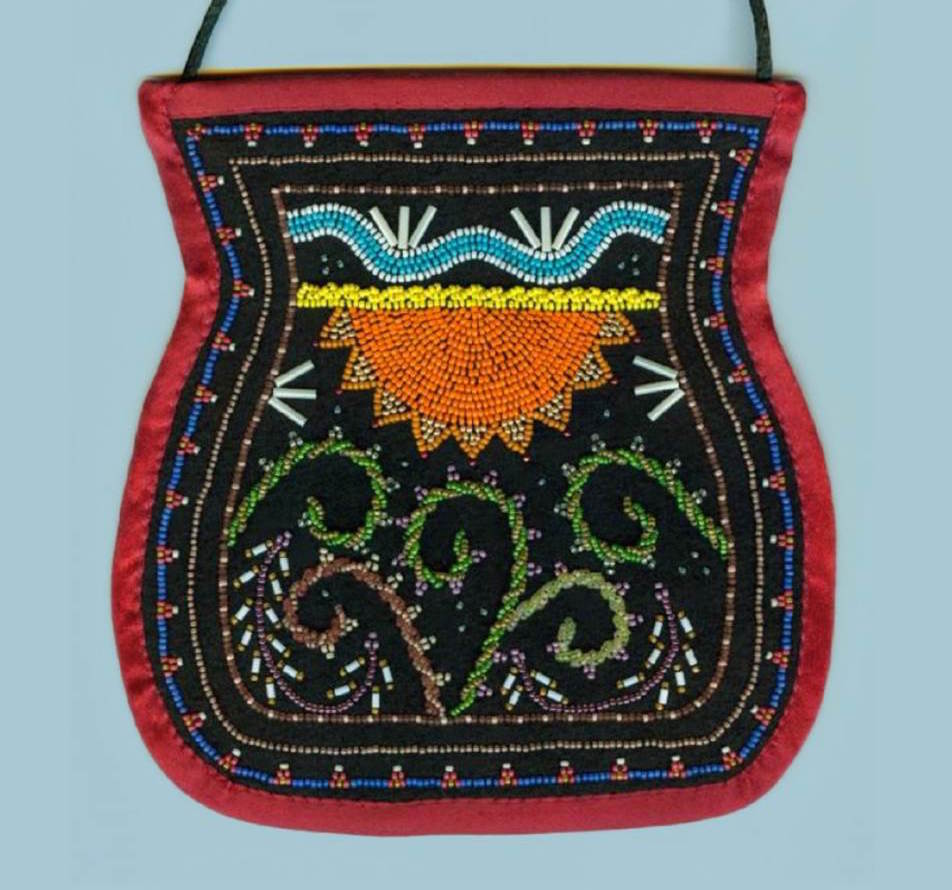