This is a small, purely decorative, fancy basket. The main structure of the basket is tightly woven with light colored ash splints. The even sized and very smooth splints indicate the later date of the basket. Small decorative curls, known as cowiss, fashioned out of a darker splint cover most of the outside of the basket. These curls, called cowiss, are a common decoration on fancy baskets. The handles of the basket, two on the sides and one on top, are highly decorative. Due to its style, the basket would have been an item popular among tourists in New England.

The Legacy of Basketmaking

By continuing to make baskets, basketmakers today preserve a traditional way while also being involved members of their communities. Basketmaking creates a connection between ancestors, the older generation, and the younger generation that is important to the continuation of the art of basketry: "the work we create as artists connects us with our ancestors and leaves behind a connection for those yet to be born to remember who we are and were. The baskets, carvings, beadwork, tools, and items that made their way into museums still speak to us and teach us" (Mundell 26).

Basket styles continue to change, which is a testament to the adaptability of the Abenaki people: "Each new ash splint basket crafted by Abenaki basket-makers… is a modern creation, designed to meet current 21st-century needs. Yet behind each basket lies a fascinating, time-honored history of native woodworking and basket-crafting here in the northeast” (Goff). Despite changing styles, the legacy is never lost and the tradition and process of making a basket remains much the same as it used to.

Today various basketmakers such as Jesse Laroque, Jeanne Brink, Judy Dow, and Bill and Sherry Gould, keep the tradition alive by teaching apprentices and the younger generation, selling their wares, providing information, forming organizations and attending events that keep basketmaking a big part of New England culture. By keeping the tradition alive, Abenaki basketmakers are able to keep their tribe in the news and in the minds of the people of New England. And because for many years Indigenous peoples were erroneously labeled as disappeared from the area, being in the public eye helps to break down those stereotypes. 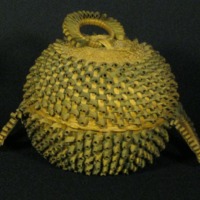