One of our most modern baskets, this red fancy basket was created by Mohawk Basketmaker Mary Adams in c. 1970. With its green and red ash splints making a continuous spiral pattern, the basket illustrates the intricate art of basketry. A circle of sweetgrass on the top of the basket with splints shaped into a flower like pattern demonstrates the artist's skill. More than just a decorative or utilitarian object, this basket tells a story of survival and triumph. Mary Adams' baskets incorporate modern aesthetics and a comment on the Mohawk world-view into the art and process of basketmaking. Every basket illustrates her life story and the debt that basketry as an art form owes to her.  This piece is housed at the Mt. Kearsarge Indian Museum

The Mohawk have been making baskets for a long time. Every step of the process underscores their dedication to traditional beliefs while also adapting to changing times: "Mohawk people of today have combined centuries-old ways of living into 20th century everyday life. The values of their historical culture still remain present in their daily life" (Mohawk Tribal Website). Despite much adversity, the Mohawk tribe has survived and preserved their culture. Because American Indians as a minority are not given as much attention as other minorities, tribes do their best to positively emphasize their modern culture. The St. Regis Mohawk tribal website, for example, delineates the continuance of their culture: "The Kanienkehaka, or Mohawks as they are known in English, have managed to preserve, maintain and foster a unique culture for thousands of years. This dynamic culture has survived, despite the oppressive odds brought about with the arrival of Europeans in what is now known as North America” (Mohawk Tribal Website).

Baskets such as this one are proof of the continued presence of Mohawk people into the present day. In Akwesasne (the Mohawk land around the St. Lawrence river) today, there are more than a hundred Mohawks that practice basketmaking (Williamson).  Through her baskets, Mary Adams showcased her culture and inspired others to take on and continue the trade.

Mary Adams was born on Cornall Island, Ontario, Canada in 1917 and died in Fort Covington, New York in 1999 (Smith). She learned basketmaking at a young age from her mother: "When my mother used to make baskets, my brothers and sisters and I used to play with the scraps she threw down around her" (Smith). At ten years old, when her mother died and her father left to find work as an ironworker, Adams made baskets with the help of her brother to support the both of them (Thornburn 92). Adams began by making a dozen baskets a week (later upping the production to two dozen baskets a week) (92). Adams would trade the baskets in for cigarettes at one store and then trade the cigarettes at another store for $1.25 (92). She continued making baskets to support herself for the rest of her life: "That's why my baskets are so good- because I work every day" (Smith 38). In total, Adams produced over 25,000 baskets during her lifetime. Later on in her life, Adams had more time to experiment with different forms and decorations (Thornburn 92). She is famous for her exquisite Wedding Cake Basket and for the Pope Basket that has various smaller baskets (over 150) attached all around the rim.

The Continuance of Basketry

Passing on the tradition of basketmaking was especially important to Mary Adams: "Continuing the community- centered tradition of the Mohawk, Adams shared the original patterns and surface designs in her basketry with her family and the women at Akwesasne, and also traveled widely to give demonstrations of Mohawk basketmaking " (Thornburn 92). Adams taught many people what she knew about basketmaking including her children. In a recording from North Country Public Radio, Mary Adams recalls how one woman would often come over to learn basketmaking. Later on, when the woman was more experienced, she called Adams to ask for her advice if she got stuck ("Mary Adams"). When the woman asked how much the lesson cost, Adams replied with "I don't charge you anything. I just want you to learn" ("Mary Adams"). Much more important than making money, Adams' goal was for younger people to learn and in turn teach others so that the tradition could continue on.

Michele "Midge" Stock recalls how she had the great pleasure of meeting Mary Adams and learning from her through a New York Folklore Society mentoring project: "She invited me to her home to learn more about Iroquois Basketry. I was thrilled, of course, as I was a novice, and she is one of the most well-known Iroquois basket-makers in the world" (Stock). In 1998, when Adams was injured due to a fall, Stock helped Adams with her baskets (Stock). Mary Adams’ daughters would also join in (Stock).

Adams drew on various sources for her inspiration. Mary Adams used a mix of modern culture and the traditional art of basketry to make The Wedding Cake basket. Built to look like an elaborate wedding cake, the basket commemorates the 25th wedding anniversary of one of her daughters. Although wedding cakes are a popular modern tradition, Adams used her knowledge of basketry to put her own spin on the significance of the anniversary (Thornburn 92). A testament to modern Mohawks, the basket merges two cultures. Mary Adams also created the Pope Basket, which mixes religious influence with the Mohawk traditional art of basketry. A devotee of Kateri Tekakwitha, a Catholic Mohawk woman who lived during the 17th century, Mary Adams presented the basket to Pope John Paul II in honor of Kateri’s beatification (92).

The Culture of Baskets

Modern baskets illustrate the melding of traditional customs with modern aesthetics and lifestyles. One of the most famous Mohawk basketmakers, Mary Adams expanded and experimented with different designs, colors, and techniques. Despite having to grow up at the very young age of 10 and support herself and her brother, Adams was able to make baskets to sell for money in addition to expanding on the art form. Mary Adams’ baskets emphasize the unique culture of the Modern Mohawk by combing different aesthetics: Mohawk, non-native, and Modern American. 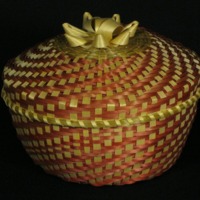