This fancy basket with a flip lid has dark colored handles on the side and a blueish green latch on the front. The edge of the basket is decorated in a spiral formation with small ash splints of the same color. A circle of dyed ash splint is the focal point of the basket while the rest of the basket is woven with sweet grass: "Sweetgrass is a perennial grass that occurs in a wide variety of habitats including moist meadows, riverbanks, forest edges, low prairies, wetlands, shorelines, roadsides, and other disturbed areas" (Shebitz 258). It is commonly used in basketry and is also used as “a ceremonial smudge and incense or medicine” (Shebitz 357). “Sweetgrass, which can only be gathered once a year in July” has a very sweet fragrance and retains its smell even after it has been dried (Fratini). The material is just as important as the final product and the fact that sweetgrass is used in baskets indicates that a basket is more than an object with only a functional purpose. This archive continuously argues that baskets can serve as a text. They can say just as much as a letter, a deed, or a petition as long as the context of the basket is examined. Although Indian literature was not always alphabetic, various tribes had their own forms of communication as well as a permanent way to pass on their traditions from generation to generation. This basket is part of that communication.

Like Ash trees, sweetgrass is becoming harder and harder to find: "it is becoming more difficult to locate, and gatherers believe that its population is declining " (Shebitz 258). However, steps are being taken to preserve what sweetgrass is left and introduce sweetgrass where there is no longer any. For example, Daniela J. Shebitz and Robin W. Kimmerer worked with Kanatsiohareke, a Mohawk farm, to explore the possibilities of the reestablishment of sweetgrass because "Traditional crafts made from locally grown plants can strengthen the community both by preserving traditional art forms, such as basketry, and by providing a means of income" (Shebitz 258). This project emphasizes the connection between plant, tradition, and community. Likewise, baskets are an important part of the Abenaki community both in the past and in the future.

What is a Fancy Basket?

Probably from the 1900s, this basket was created at the height of the fancy basket period. Because fancy baskets were very popular in the late 1800s, many Abenaki would travel to tourist destinations in New England. For example, Joseph Laurent, chief of the Abenaki at Odanak from 1880 to 1892, "set off south for the summer with a group of Abenaki and Sokoki Indians to sell baskets. In 1884 they settled on a permanent spot in Intervale" (101 New Hampshire Century). The permanent encampment in Intervale sold baskets among other items such as canoes (101). Joseph Laurent also published New Familiar Abenakis and English Dialogues. His son, Stephen Laurent, later continued work at the Indian Shop and eventually became inspired to translate a dictionary, which helped revitalize the Abenaki Language (Koenig). The shop stayed in business until the late 1900s. Baskets such as this one were probably sold at the shop. These handmade baskets were an essential source of income. The popularity of the baskets coupled with the economic independence provided by this camp and others like it, allowed the basketmaking tradition to survive. As the Abenaki are not federally recognized, baskets such as this one help to reaffirm the Abenaki presence in New England.

The Importance of Context

Baskets require context to understand. Similarly, the Abenaki language places a big importance on context. For example, Stephen Laurent explains, "Even the simple word 'hand' gave one missionary a great deal of trouble. The Jesuit, pointing to his own hand, looked inquiringly at the Indian. The latter grunted, 'Kelji,' meaning Your hand.' Later to verify his records, he repeated his question, pointing to the Indian's hand. This time the answer was, 'Nelji,' meaning 'My hand'" (New Hampshire Century 100). The word hand does not stand-alone; it belongs to someone. The context of the communication is important because it does not make sense for a hand to stand alone, it is part of something bigger: "Finally to isolate the noun, the missionary persuaded someone inside a wigwam to stick out his hand through a slit in the doorway. The answer was 'Awanelji,' 'Someone's hand.'" (100). Likewise, the context of baskets must be discovered for their textuality to be evident.  The fancy basket "movement" illustrates the economic independence of American Indians at the end of the 18th century and beginning of the 19th century. Furthermore, the format of the Abenaki language explains why context is so important as far as Abenaki baskets and other texts are concerned. The hand must belong to someone because that is the way that hands work: without the person and context the hand is meaningless. Likewise the basket does not mean as much without the context surrounding it.

The next generation is just as important as the last generation: both are needed to strengthen a culture and keep it as a continuing presence. The strongest argument for how a basket counts as a text is in what a basket communicates to the decedents of the basketmaker. In a book dedicated to American Indian basketry, North By Northeast, Kathleen Mundell writes, “The work we create as artists connects us with our ancestors and leaves behind a connection for those yet to be born to remember who we are and were. The baskets, carvings, beadwork, tools, and items that made their way into museums still speak to us and teach us” (Mundell 26). As Joseph Laurent passed down his passion for the Abenaki language to his son Stephen Laurent, so too do others pass down the passion of basketmaking to the younger generations. A basket, when looked at in conjunction to its context can inspire the younger generation to continue the tradition. 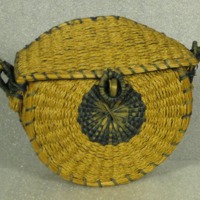