This hat basket, one that would have been sold to tourists, nicely illustrates Abenaki basketry's functional and aesthetic appeal. The chain link design on the lid, a common design on many baskets, represents friendship (Hopkinton Historical Society). The inside of the basket is lined with newspaper, a common practice at the time, and serves a purely functional purpose (Fitzgerald 52). Although various words can be read from the print, the basket overtakes the newspaper as the "text" through its continuance of Abenaki culture and tradition (Fitzgerald 52).

The Impact of Tourism

The earliest baskets were used for carrying items and storage. However, beginning in the nineteenth century, an influx of tourists into northern New England turned this tradition into a way to earn a living.  As authentic Native-made baskets became more fashionable. their design changed. They went from simple, understated containers to brightly colored affairs designed to draw consumers' attention.

When visitors to New England were shelling out cash for authentic Native American-made baskets, they wanted what they envisioned as the full Native experience. Some Abenaki families, like that of Maurice Dennis, donned stereotypically “Indian” looking clothing expressly to sell their wares (McMullen 32). Cultural observers, and basketmakers themselves, have mixed feelings about these accommodations. One Native anthropologist, Lisa Neuman, has expressed concern about the damage done to Native cultures and economies when basketmakers are forced "into the expected stereotypical roles of indigenous 'craftspeople'” (90). In Maine, Neuman observers, voters roundly defeated a Wabanaki proposal to build a casino for economic self-sufficiency.  In Neuman's assessment, non-Native citizens expected Wabanaki people to "'stay quietly on our reservations'. . . passive and docile rather than full participants in Maine’s economy” (91).

Art historian Joan Lester details these aesthetic changes: “Basket weavers were already accustomed to accommodating their craft to non-Indian tastes and styles. By the 1860s, round, covered ash-splint baskets with splints of varying widths, swabbed with color, were being made by Penobscot weavers [in Maine]. Modeled after hat boxes and bandboxes, these baskets were sought after for their practical as well as aesthetic qualities. And the weavers seem to have understood what would appeal to this new tourist market.”

On the other hand, some basketmakers use their art directly to combat stereotypical attitudes. Gail Tremblay (Onondaga/Mi'kmaq) makes baskets out of a material that is arguably a prime source of many contemporary stereotypes: film stock. She effectively “us[es] film against its cultural grain to build an indigenous object for preservation” (Cohen 176). Similarly, Judy Dow (Abenaki) makes baskets out of materials including recycled gum wrappers and pantyhose as a way of commenting on the depletion of natural resources on which her people--and all people--depend.  Moreover, Dow asserts, adaptation is a way of ensuring that "basketry techniques will live on and then so will our heritage."

Lester, Joan.  "We Didn't Make Fancy Baskets Until We Were Discovered."  In Ann McMullen and Russell Handsman, eds.,. A Key Into the Language of Woodsplint Baskets. Washington, CT: Institute for American Indian Studies, 1987.  42-53. 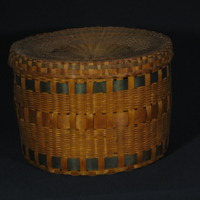 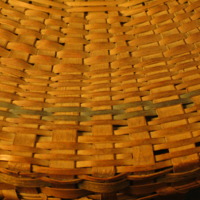