Katherine Garret’s “Dying Warning” would appear at first glance to be a testament to her life and her conversion to Christianity, though closer examination raises many questions. Garret was a Pequot Indian servant in the home of Reverend William Worthington, accused of committing the murder of an infant believed to be her own in the fall of 1737. After the guilty verdict was read at her trial in Saybrook, Connecticut, Garret was shocked and became extremely emotional, as she thought that she would be pardoned. In Native culture at the time, infanticide was considered a form of late abortion, however, Garret was put before a jury of white colonialists who did not share the same cultural practices and values. She was granted six months in prison in the hopes that she would turn her life around and see the error of her behavior.

Garret was visited often by townspeople, and was even allowed to be released from custody to participate in Christian gatherings after her proclaimed conversion to Christianity. The decision to convert was quite common for Indians facing death, and may have even been a failed attempt at receiving a pardon from the Government, as Garret had been in a Christian home since the age of fourteen without showing any signs of assimilating to the culture of her captors.

The format of Katherine Garret’s “Dying Warning” is consistent with the genre of Indian deathbed literature, as well as criminal biography; two forms that were popularized due to the era of the Great Awakening, and was used as evidence to prove how effective the reformation of Native Americans was. However, Garret broke from the approved format by using strong language and images to illustrate her feelings about her impending execution. The language was not outright enough to be edited from the document, which was distributed by Revered Eliphalet Adams, who spent a great deal of time with Garret during her incarceration and delivered the sermon at her execution, and both documents published by Timothy Green.

In the opening sentence, Garret uses the word “justice” to directly reference the injustice of what has happened to her; she was placed before a jury of white men, despite the lack of evidence directly linking her to the murder, and sentenced to death, though the act she was thought to have committed was most likely done in accordance with Pequot tribal traditions. Garret was forcefully separated from her culture at the young age but remained faithful to the Pequots, as is noted in her dress and resistance of conversion to Christianity. It should be noted that the name of the suspected father to the child was never named in the trial, sermon, character account, or dying warning. She calls out to “the Justice of the Court who has Sentenced me to die this Death”, which she stated prior was to be a “Violent Death”, as a late appeal to the emotional in the hopes that she may be released. Garret spends the first half of the text in describing how she came to her Conversion in prison, and thanking those who showed her kindness and brought her books to read, other than the Bible. Garret speaks about her past as a sinner, “a sinner by Nature, also guilty of many Actual Transgressions, Particularly of Pride and Lying, as well as of the Sin of destroying the Fruit of my own Body”, although she does not openly say that she committed murder, further evidence that she saw the supposed infanticide as a form of abortion. Garret recognizes that she “destroyed the Fruit”, purposefully not using any word to call to mind a human child, and takes responsibility in the words “my own Body”.

The second section of the warning is quite typical- urging children to behave and listen to their parents, though Garret does use natural images from Native spiritual traditions in order to understand the harsh punishments of the Christian Bible; “For the Eye that Mocks at his Father and despiseth to Obey his Mother, the Ravens of the Valley shall pick it out, and the Young Eagles shall eat it”. In the “Anonymous Character Account” that is believed to have been written by Adams, as it was included in the pamphlet of his sermon, there is a reference to Garret having been with in the home of the Reverend Worthington since “childhood”, but she had not been assimilated prior to her incarceration. In her use of traditional Native ideas, Garret again points to her true culture.

The third section is a complete break from the traditional form, calling out to servants and slaves “Either Whites or Blacks, be Obedient to your Masters & Mistresses” but “Above all Fear God; fear to Sin against Him: He is our Great Master”. By combining slaves, regardless of their color, into one group and emphasizing that God is the true Master, Garret makes the ownership position of master on Earth a trivial one, as “Parents and Masters…You must also give an Account to God how you carry it to them”. Everyone reports to the same Master after death, regardless of their societal position in life.

Fickes, Michael L. “`They Could Not Endure That Yoke’: The Captivity of Pequot Women and Children After the War of 1637”,

Boston, Patience. “A Faithful Narrative of the Wicked Life andRemarkable Conversion of Patience Boston Alias Samson; Who Was Executed at York, in the County of York, July 24th. 1735. for the Murder of Benjamin Trot of Falmouth in Casco Bay, a Child of About Eight Years of Age, Whom She Drowned in a Well.”, 1738.

Adams, Eliphalet. “A Sermon Preached on the Occasion of the Execution of Katherine Garret, an Indian-servant (who Was Condemned for the Murder of Her Spurious Child) on May 3d 1738. To Which Is Added Some Short Account of Her Behavior After Her Condemnation.” Timothy Green, 1738. Early American Imprints. Garret, Katherine. “Dying Warning of Katherine Garret”, New London, Connecticut, May 3, 1738.

Lauber, Almon Wheeler, and The Faculty of Political Science Columbi. Indian Slavery in Colonial Times Within the Present Limits of the United States. BiblioBazaar, 2010. 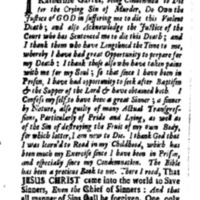 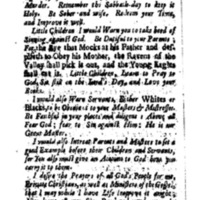