Probably made by Mi’kmaq Indians, this small fancy basket was used as a holding place for locks of hair ("Hair Basket"). Keeping hair for sentimental value, "possibly the curls from a first haircut or a memento of a deceased loved one," was popular during Victorian times ("Hair Basket"). This particular basket belonged to Rose Putney Hanson of Hopkinton whose "grandfather, True Putney (1849-1904), remembered Native Americans coming to Hopkinton to sell baskets" ("Hair Basket"). This cylindrical basket is made out of ash splints and sweetgrass. The top edge of the basket is lined with ash splint lace, which was "used by Native basketmakers and was also sold to non-Native basketmakers such as the Shakers"("Hair Basket"). The inside of the basket has dyed purple splints but the outside splints probably lost their color because of sunlight exposure. Sweetgrass has a sweet scent that lasts long after the grass has been dried: "A popular grass that was used then and is still used today is sweetgrass, which is also a sacred grass used in Mi'kmaq ceremonies such as the sweetgrass ceremony that purifies and cleanses body, spirit, and mind" (Sark). This basket is included in the archive because it emphasizes Mi’kmaq culture.

The Significance of the Material

One of the ways that the basket showcases Mi’kmaq culture is through its material. More than simple material, the sweetgrass in this basket has a deeper meaning. It is a plant that has a spiritual connotation. One version of the Mi'kmaq creation story explains how Kluskap's nephew was created by the joining of sweetgrass and the sea: "To honor Kluskap's nephew we braid the sweetgrass, the hair of mother earth" (A Mi'kmaq Creation Story). Basket materials, through their difficult procurement and association with the creation story, are just as important as the basket itself. This hair basket represents tradition, culture, and the hard work and careful mastery of Mi’kmaq basketmakers.

The Contribution of Baskets to Mi'kmaq Culture

Mi'kmaqs have been making baskets for generations. The Mi'kmaqs adapted to economical change brought on by the Europeans by changing the types of baskets they made. Baskets were very important before contact with Europeans and were used for storage and the transportation of goods (Sark). After the Europeans arrived, Mi'kmaqs began trading baskets to Europeans in exchange for materials they did not have and these baskets were utilitarian in nature (Sark). In addition, baskets and the technique of basketmaking were used for the procurement of food: "They contributed to Mi'kmaq survival also by being used for fishing purposes: 'The larger fish were caught most commonly by two methods: one was to build a weir across the stream and to place a basket net in the mouth of a small opening. When the basket filled, it would be emptied and returned to the water'" (Sark). Later on during the 1800s, Mi'kmaqs made both utilitarian baskets and fancy baskets. Utilitarian baskets were sold to farmers during harvests to hold potatoes and other items (Carter). Unfortunately, the farmers overlooked the quality of the baskets and baskets did not sell for the price they were worth (Carter). Fancy baskets, on the other hand, were more decorative and could sell for a higher price. These baskets were appreciated for their art and intricate detail (Sark).

The Creation of a Basket

Making a basket is a difficult procedure. In his article, "Making a Micmac Basket," Roland Caplan explains how a Mi'kmaq basket is made with the instruction of Ellen Googoo, a long time Mi'kmaq basketmaker. The materials, he explains, are hard to come by: "the right wood is not easy to find. It must have good straight grain and no knots" (Caplan 3). The tree must also have "the right texture and the right sap" so that it will split right (Sark). Once the splints are made, they must be smoothed: "The step of smoothing is known as Nultaguan" (Caplan 4). A crooked knife, which has a handle with a curve to it, is used for this process (4). Once the splints are made, it is possible to dye them in different colors. Alternatively, the splints can be left to their natural color. Although commercial dye was used often in the 1800s, natural dye was also sometimes used: "When Mi'kmaq women wanted to include colour in their baskets, they could also dye strips of reed and grass, using berries in various concentrations to create the colours they wanted" (Sark). Different designs, colors, and ways of weaving the baskets each have a meaning and illustrate the artistic skill and passion of basketmakers. Even plain baskets have different widths of splints and patterns of weaving. There are various basket styles from plainer utalitarian baskets to fancy baskets decorated with quillwork. They are all a part of Mi'kmaq culture.

Mi'kmaq Indians are also known for their quillwork on baskets and birchbark. Quillwork is intricate and like basketry takes time and patience. Although few people are left who specialize in quillwork, classes and renewed interest are helping to keep this tradition alive. For example, “The Mi’kmaq Tradition of Quill Basket Making” describes the positive energy created by a quillwork class conducted by Mi’kmaq artisan Beverly Julian of Millbrook: “A sense of Mi’kmaq Pride resonated in a classroom downstairs at the Wagmatook Cultural center just before Christmass 2010” (Paul). The class has encouraged many students to pass down their skills to the next generation (Paul). The continuance of basket making relies on the teaching of the traditions to the younger generation. Their adaptability helps the tradition survive. Our Lives in Our Hands also depicts a basket making class filled with students of all ages. Although few people were making baskets, renewed interest is increasing the number of basketmakers as well as the number of people interested in purchasing baskets.

The Economics of Basketmaking

The mid to late 1900s were difficult for the Mi'kmaqs especially before their federal recognition in 1980 (Carter). Mechanization on farms made baskets obsolete and the allure of cheap machine-made objects easily shadowed the hard work and mastery that goes into making a basket (Carter). However, basketmaking is again making its way to the forefront. Various basketmakers, Mi'kmaq and otherwise, are emphasizing their handmade craft as something that is worth paying a high price for. For example, Rita Smith, was a basketmaker also known for her work for the First Nation Horton reserve. This video shows her teaching her grandchildren about basketmaking. In a world were most objects are mass produced by machines, a handmade object heavily stands out as representative of culture and physical skill.

This basket is important because it demonstrates the skill, adaptability, and devotion to detail and art of the Mi’kmaq people during a time that was historically very difficult. Despite changes in the economy as well as pressure from the Europeans to think and act in different ways, they were able to keep basket making, quillwork, and other traditions alive. 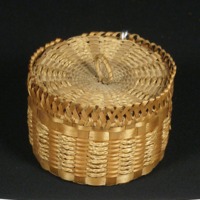 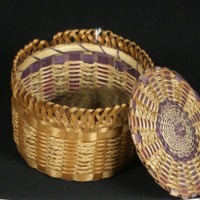