But what analysis can be gained by looking at a basket? How much can a basket say? In her essay, "The Cultural Work of a Mohegan Painted Basket," Stephanie Fitzgerald writes, "Baskets, which were and still are ceremonial and utilitarian objects used for transportation and storage of items, prayer ceremonies, and traditional games, function as communicative devices. In sum, by touching every aspect of daily Native life, both past and present, basketry is imbued with cultural and spiritual power" (Fitzgerald 53). As an object needed for daily use, baskets have a direct connection to daily Native life. Because a basket is connected to the community, both now and in the past, through the basket making process and through its functional uses, baskets form a big part of Abenaki culture and tradition.

Non-native written documents are biased and looking at non-alphabetic texts can create a bigger picture and form a more complete version of history. In his article, "Oral Tradition as Complement," Gordon Day writes, "All through the period of discovery, exploration and colonization they caught only glimpses of the Indian's attitudes, motivations, and understanding of the situation, and they were obviously not in a position to observe many events which were witnessed by Indian observers" (Day). In other words, non-native texts cannot explain everything because there is much that was only seen through the Indian's perspectives. Additionally, non-native writers were often biased and could not understand the position of the Abenaki: "dialogue with indigenous records enable us to imagine a literary tradition routed in negotiation and dialogues - rather than simply conquest and colonial monologues as the foundation of American Literature" (Rasmussen 9). The possibility of "A literary tradition routed in negotiation and dialogues" is why baskets are included within this archive (9). They are witnesses to a larger picture of history. Furthermore, because the Abenaki are not federally recognized it is important to appreciate baskets as a form of documentation that proves the continuing presence of Abenaki people, culture and traditions. As part of the criteria for recognition includes “documentation of sustained unity and government,” baskets can only aid the goal (Lindholm).

The Abenaki are not federally recognized, however, four Abenaki bands, The Missisquoi, the Koasek, The Nulhegan, and Elnu tribes, have Vermont state recognition. This state recognition is important because of three reasons. First, it allows their artisans to sell items with the Native American made label, which lets the artisans sell their wares for a higher price. This enables many basketmakers to be financially independent through their craft. Second, it “allows members to apply for some federal programs including housing and education grants” (Lindholm). It opens the doors for the society to progress. Third, it provides a positive emphasis on their idea of identity. In other words, they no longer have to fight as hard to convince others of their identification as Abenaki: "Wabanaki Basketry can be used by Wabanaki people to assert tribal sovereignty and promote decolonization" (Neuman 100). Basketry also works as an outlet of communication between natives and non-natives (Neuman). It enables the dialogue started by looking at native texts to continue.

The Worth of a Basket

By focusing only on written works, a heavily non-native view is explored. Baskets add an additional piece of the puzzle to the Abenaki view of the world. Baskets such as this one prove that the Abenaki had and continue to have their own concrete culture.

Although this basket is utilitarian and not decorative as some of the fancy baskets in this archive, the “textuality” or literary worth of the basket is evident through its materials, its uses, and the careful process of basketmaking. This archive aims to be one of inclusion, not exclusion. By including both utilitarian and fancy baskets in context with their materials, the process of basketmaking, and the way that baskets continue to affect the Abenaki and other tribes today, a larger literary picture is formed. 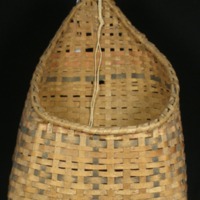 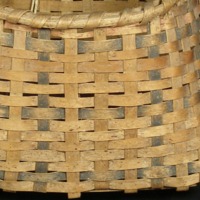