John Christian Hopkins is a Narraganset journalist, author, poet and public speaker who resides in Tuba City, Arizona. Hopkins was born in 1960 in Westerly, Rhode Island. In 1983, he enrolled at the University of Rhode Island, where he graduated with degrees in journalism and history in 1987.

Hopkins spent time as a nationally syndicated newspaper columnist for the Gannett News Service, and also has written for USA Today, The News-Press, The Pequot Times, The Westerly Sun, Indian Country Today Media Network, News from Indian Country and Native Peoples Magazine. His work has received recognition from the Gannett Awards and the Native American Journalists Association (NAJA) Awards. In 2003, he became the first member of the NAJA to receive awards in four different writing categories during the same year (news, features, sports and columns).

From an early age, Hopkins knew exactly what he wanted to do and made it happen.

“I’ve never wanted to do anything other than write,” Hopkins said in an interview. “Through journalism I saw a chance to write, tell stories of interesting people and things and get paid for it!”

From Journalist to Author

The field of journalism has brought Hopkins from Rhode Island to Massachusetts, New York, Florida, and now Arizona. While he has been in the reporting business for twenty-plus years, he also delved into writing fiction novels over the past decade.

Hopkins has published five books: Carlomagno in 2003, Nacogdoches in 2004, The Pirate Prince Carlomagno in 2011, Twilight of the Gods in 2011, and Rhyme or Reason: Narragansett Poetry in 2012.

Hopkins doesn’t shy away from trying out different genres, whether it be historical fiction, fantasy, science fiction, or even poetry.

“I can’t sleep at night because my mind won’t turn off; I spend time thinking of things to write about, genres I want to try,” said Hopkins. “I feel some need to create.”

His first book, Carlomagno, is based off King Philip’s War, fictionally elaborating on the story of King Philip’s captured son, whom he names “Carlomagno.” Hopkins’s long love of westerns is apparent in Nacogdoches, which follows “The Rango Kid,” as he impersonates a sheriff and finds himself forced to stand up to a criminal. The Pirate Prince of Carlomagno continues to tell a story of a Young Native American’s struggles to elude slavery. In Twilight of the Gods, Hopkins explores the science fiction genre by writing about the supernatural coming to life, based off the Mayan calendar’s predictions. Most recently, Hopkins published Rhyme or Reason: Narragansett Poetry, which touches on Narragansett tribal history.

“I definitely enjoy mixing real history with fiction, so that not only can I tell a story, but maybe help the reader to learn something they didn’t know,” said Hopkins. “By the way, I am related to the main character in Carlomagno.”

Hopkins is related to the Wampanoag tribe and is of kin to Quadequina — known famously for introducing popcorn to the Pilgrims at the First Thanksgiving. In addition, Hopkins is of King Ninigret descent — the last hereditary royal family of the Narragansett Native Americans in Rhode Island. Hopkins himself served as a Narragansett Tribal Council member from 1994 to 1996.

“I don’t want to be limited,” he said. “I’ve worked at newspapers where I was the 'Indian' writer, go do the pow wow stories, write about casino plans. I am more than that. I will not be put in a box and be defined by someone else.”

Between his novels, poetry and journalism, Hopkins’s writing style varies drastically. But when he is wearing his nationally syndicated columnist hat, Hopkins greets his readers with a particularly humorous tone.

“I write for an audience,” said Hopkins. “I prefer humor because there is too much sadness in the news and I want to brighten someone’s day with an unexpected chuckle or smile. I also think it’s more challenging to be funny as writer. Everyone understands sadness and pain, but to make someone laugh is special — because people have different senses of humor.”

The following depicts his lighthearted voice as a columnist:

I never planned to be a failed journalist or a hack writer. Seriously, in my youth, I had big plans that included wealth, women and worldwide fame.

Now I’d settle for a Twinkie and a Diet Coke.

I’m not one of those quacks that hope to better his or her life by climbing Mount Everest or learning to make origami swans. Instead, I am devoted to Self-Hypnotic Introspection Therapy. (You figure out the acronym for that). (”My Past Lives Relived for You,” Indian Country Today Media Network)

As his writing style may suggest, Hopkins has fun with all the day-to-day responsibilities of being a writer. He is currently working on a couple projects, and that’s the way he likes it. One of his projects is a western that takes place in an Arizona ghost town; the other is a fantasy about wizards and warriors.

Again, he has fun with it.

“I’ve never been intimidated by a blank page and a deadline. I see it as a challenge, a test,” Hopkins said. “And usually I have far more to say than I can fit on a blank page. Also, it’s my way of gaining immortality. I’ll be gone some day, but my words will live on.” 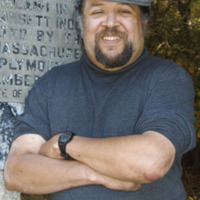