Linda Coombs* is program director of the Aquinnah Cultural Center. She is an author and historian from the Wampanoag Tribe of Gay Head (Aquinnah).

Born and raised in Martha's Vineyard, Coombs lives with her family in the Wampanoag Community in Mashpee on Cape Cod.

After she graduated from University of Massachusetts at Lowell in 1971 with a degree in music education, Coombs began a museum career in 1974, interning at the Boston Children's Museum as part of its Native American Program. She and her peers, including Narragansett elder Paulla Dove Jennings, wrote children's books for the museum, illustrating Native American culture from a Native American perspective. Coombs later worked for nearly three decades with the Wampanoag Indigenous Program at Plimoth Plantation, including 15 years as the program's associate director.

Her children's book, Powwow, was published in 1992 by Modern Curriculum Press under their Multicultural Celebrations series; it chronicles the experiences of a Native American girl at her first powwow. The book is 23 pages long and is illustrated by Carson Waterman.

Additionally, through her work at Plimoth Plantation, Coombs wrote a number of essays documenting colonial history from a Native American perspective. For example, at a conference on Thanksgiving, she stated,

The actual and factual history of Thanksgiving in this country will be discussed: the European origins, views and practices, and how it evolved into the holiday it has become today. Many people don’t realize that thanksgiving was not a new concept to Native people. … Native people have held thanksgiving ceremonies since the time of Creation. The energy of lifeways of acknowledgement and thankfulness is what sustained Native culture for millennia.

Coombs strives to promote truth, authenticity and cultural sensitivity. In 2008, she received some media attention when she asked a nine-year-old girl to remove her indian costume before entering the Wampanoag site at Plimoth.  When the child cried, Coombs gave her a necklace from the gift shop as a token of reconciliation.  “Costumes are offensive because of what has happened in history,” Coombs explained; “we’re trying to educate people about our culture and to correct stereotypes and wrong information, we’re here to make a bridge between people, not to just send them packing."

Coombs is passionate about educating the public about myths concerning not only Wampanoag culture and traditions, but those of all Native People. Her goal is set on continuing to educate the public about Wampanoag history, culture, and other contributions and to present their nearly-forgotten traditional skills and technologies of her 17th century ancestors as authentically as possible. The material history of her research includes traditional wetu (house) construction, mat weaving, pottery, deerskin clothing, twined woven baskets, gardening, and foodways.

Community is the Wampanoag way. According to archeological records, the Wampanoag have been around for at least 12,000 years. They did not maintain their culture that long without work. But the Wampanoag have undergone a difficult history through colonization, and are now divided into separate tribal communities. Re-linking those communities together is a way of preserving the ancestral homelands and Wampanoag culture.  As Coombs puts it in "A Wampanoag Perspective,"

For many people in this country, the word “colonization” often seems to slide glibly off the tongue; and when it is used, the full aspects of its meaning are not recognized. … The deeper, dark meanings of the word have been “bred” out of American history. However, people still carry associated attitudes and behaviors that go unrecognized for what they actually are.

Coombs understands the importance of preserving her culture and making certain that the lives of her ancestors are not forgotten; she has dedicated her career to this cause and wants to share it with the world.

"The people today are the windows to the past if one knows how to navigate." -Linda Coombs

*This article began as a biographical profile for Wikipedia.  Thanks to Linda Coombs for her input and feedback on that article as well as this one.

“Hobbamock’s Homesite.” Thanks, But No Thanks: Mirroring the Myth: Native Perspectives on Thanksgiving. Plymouth, MA: Wampanoag Indian Program. September 9, 2000: 2-3. 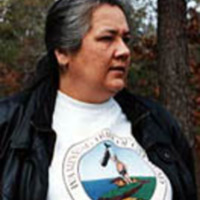