Carol Willette [Snow Moon] Bachofner is a Native American poet of Abenaki descent. She is a resident of Rockland, Maine. She has published several collections of her own poetry, includingNative Moons, Native Days, as well as Drink from Your Own Wells: a guide to richer writing.

Carol is a native of Maine but has lived for many years elsewhere, including having resided in Germany and London for some time. She graduated from Vermont College with a Masters of Fine Arts in Poetry and has been a professor of college-level English at Victor Valley College and Taft College. She was previously a midwife and labor and delivery RN, and a free-land writer. One of her favorite ways to work with other poets, both new and emerging, is to offer poetry workshops in her local area and loves to travel to bring poetry workshops to people all over the country. A dream of hers is to spend time in Scotland translating the poetry of her Scots ancestor, William Dunbar. Bachofner recalls first becoming interested in writing poetry when she was six years old. She frequently read poems aloud to classes in her elementary years, encouraged by her teachers. This led to a “life in verse” as she tells it.

Bachofner co-founded and edits the online literary journal, Pulse in 1997. She is dedicated to unveiling new poetic voices and art. She has published her own poems in countless literary journals since 1995. Becoming a runner-up in the 2006 Main Street Rag Poetry Chapbook Award Contest, encouraged Bachofner to publish her poems in collections as well as in a broader array of literary journals including Prairie Schooner Journal, Main Street Rag, The Comstock Review, and Naugatuck River Review, among many others.

She has been nominated for several literary awards and honors, including Editor of the Year by the Wordcraft Circle of Writers & Storytellers in 1999 and Writer of the Year for her poetry by that same group in 2000. In 2007, Bachofner was a featured speaker at the Winter Wheat Conference at Bowling Green University, and in 2009, she was invited to be a presenter of poetry by indigenous writers at the Maine Literary Festival in Camden, Maine. She was also named in the 2009-10 publication of MarquisWho’s Who and made the short list (runner up) for individual works of poetry by the Maine Literary Festival in 2011. Carol’s poem Super-Hero won the First Place Portia Steele Memorial Award for Poetry in June 2007. In 2009, she was named “A Poet of Merit” by the Florence Poets Society.

In April of 2012, the City of Rockland, Maine named her Rockland, ME Poet Laureate. She launched her latest collection, Native Moons, Native Days (2012) at the Three Poets Book Launch, hosted by the Camden Public Library. Bachofner’s poem, We Speak the White Man’s Language, will appear in the anthology, Unraveling the Spreading Cloth of Time, edited by MariJo Moore and Trace A. DeMeyer. Her poems will also be appearing in the anthology Dawnland Voices, edited by Siobhan Senier, associate professor of English at the University of New Hampshire.

Bachofner frequently writes themed collections. Her collection titled I Write in the Greenhouse includes poems about Maine and its people, including Edna St. Vincent Millay and Andrew Wyath. Her other poems often describe the traditions within Native American culture. When asked in an interview by Fringe magazine what her favorite milestone in her poetry career has been, Bachofner gave a very thoughtful yet direct reply. She said, “Getting published in Prairie Schooner. I was in my MFA program and had written a kind of quirky poem for me. My advisor told me to throw it away, but I started sending it out and Prairie Schooner took it. That was a turning point for me. I realized it wasn’t about somebody else’s point of view, it was about the writing and how I encountered language. Carol often writes with a strong sense of place as narrative, and enjoys writing in both traditional and free verse. 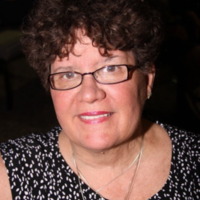 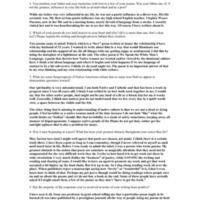 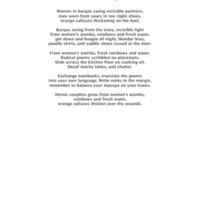 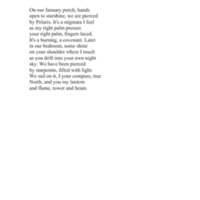