Mihku Paul is a Native American Maliseet poet, writer, visual artist, and activist. She is a member of Kingsclear First Nation, N.B., Canada and holds a BA in Human Development and Communication from the University of Southern Maine. Paul then received an MFA in Creative Writing from Stonecoast at the University of Southern Maine. Born on December 4th, 1958 Paul grew up in Old Town, Maine, along the Penobscot River. Her mother was born an hour and 45 minutes north in Houlton, Maine where the Houlton Band of Maliseets is located. The Maliseet Tribe is also known as the Wolastoqiyik Tribe. Paul, the youngest of four children was the only one in her family to complete high school. Starting a year late in her schooling, Paul didn’t struggle to catch up and ended up completed school a year early.

Her grandfather, a Maliseet elder, was instrumental in passing on tradition and cultural knowledge to Paul. Being the youngest of all her siblings, Paul’s mother stressed the need for Paul to know this history so it wouldn’t get lost in through generations. Paul’s grandfather lived on Penosbscot Indian Island Reservation near Old Town. Here Paul spent much of her childhood where she watched her grandfather watercraft, hunt, and trap. She would miss many days of school at a time while she was out on the river with her grandfather on expeditions. Though Paul lived near a reservation, hey family didn’t grow up on one due to the lack of programs dealing with infrastructure and housing. It wasn’t until after the civil rights movement during the 1960’s that those programs were beginning to be put into place. Though she lived off the reservation, conditions weren’t much better for her family as Paul grew up in a very poor neighborhood. When Paul was on the reservation she felt safe and accepted, but when she had to leave and interact, like in the public schools, that became problematic. Though she wasn’t the only Native American to attend public schools, the group of kids that did attend got bullied. Along with being harassed by the non-native students, the native students also picked on Paul due to her lighter skin completion.

Motivated by her own unsatisfactory experiences of primary and secondary education in Maine, and by her experiences of racism and discrimination as a mixed-blood Maliseet woman, Paul has worked for more than two decades to better endow teachers in the state system. This work includes curriculum enrichment that focuses on Waponahki cultural views of unity and support, as well as language arts and the connection of native language to the study and charting of North America. Paul also works with children in the Portland school district, which she has been persistently doing for over twenty years on the complicated cultural, political, and social accounts of the lives of native peoples in the 21st century. Paul also has interactive storytelling sessions surrounding Waponahki legends, and assists students with art projects by intertwining conceptual principles along with practical design. Along with Paul’s storytelling and curriculum enhancements, she also involves her art and poetry to help educate non-native people about the condition of Waponahki people in the Northeast. Outside the classroom Paul’s poetry and art support diversity projects, events, and have been instillations in various museums.

Paul is a contemporary artist and writer with traditional roots, seamlessly combining the modern world with her legacy. Paul appreciates traditional Native American arts but doesn’t have a niche for it; rather she is trying to bring her Native identity forward into the contemporary moment, and is trying to use her art as a way to bridge that into the twenty-first century. Paul has had no formal education in visual arts, just her creativity, heritage, and passion for education. Paul is particularly interested in pattern and color relationships and works with pen and ink, watercolor, gouache and mixed media collage. Paul’s first multi-media installation “Look Twice: The Waponahki in Image & Verse,” went on exhibit in October 2009 at the Abbe Museum in Bar Harbor, Maine. The exhibit is a compilation of twelve panels that combine archival images of Waponahki history and culture with original poems that are designed to facilitate the governing look at Native people in this region. Colorful medicine wheels are intermingled throughout the exhibit, merged with conceptual water shapes to evoke the flow of time, memory and the St. John river.

Paul got to share her storytelling, talent for poetry, feelings on her education, and the plight of being Native American in her first chapbook, 20th Century PowWow Playland, published in 2012. This chapbook is a compilation of poems in which the Maliseet lands are at points inventively populated with not just, “the ghosts of half a millennium” but also with “those who remain”. As Mihku Paul remains in these lands, her opposing thoughts on settler colonization are not quieted, as she believes in the rights and continuation of indigenous people in the northeast. Paul’s poems clearly give a voice to those whose words have been silenced in the holocaust of colonization and displacement.

Paul talks widely on her dissatisfaction of the education she received in the Maine public school system. In the poem “Jefferson Street School” (9) in 20th Century PowWow Playland, Paul speaks as a “kindergarten captive” who is forced to memorize and recite the “invader’s language” and partisan cultural perspective, which evidently captures and details this disillusionment. Paul tends to lead toward lyricism when it comes to her poems and Paul credits her love for the way language sounds and her talent at storytelling to her grandfather. He would spend hours with Paul telling her stories and teach her certain things in dialect.
Paul’s 34 poems delve into this thought of multiple identities; how Paul is a “child of all worlds, child of no world”. (Totem, pg. 40) Paul’s `Amerindia’ reads,  “Those hybrids” meaning Native and American are “encased in this new-made flesh”, meaning stuck and split. She ends on the question of what to do with these shattered pieces of glass, (from their original lifestyle) and what to do with what is now being presented to them, “this new fruit”. (53) In history we see this wonder of identity and the role security and money play a role in this. The reservation’s conditions prior to 1980 were disconcerting and in a way forced natives to live elsewhere and find jobs outside the community. On October 10th, 1980 the Maine Indian Claims Settlement Act was passed which granted the Passamaquoddy, Penobscot, and Maliseet tribe $81,500,000. This act proved that there were treaty issues and that the federal government owed the tribe’s money and land, which assisted the tribes to improve conditions on the reservations. Due to this assistance many people who had left the reservation to find jobs moved back. This wave of native people included many youth who had spent much of their life disconnected from the reservation. Paul currently resided in Portland, Maine and teaches creative writing at the Maine Women Writers Collection at the University of New England. 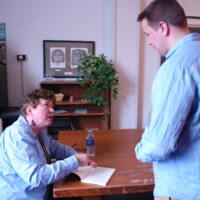