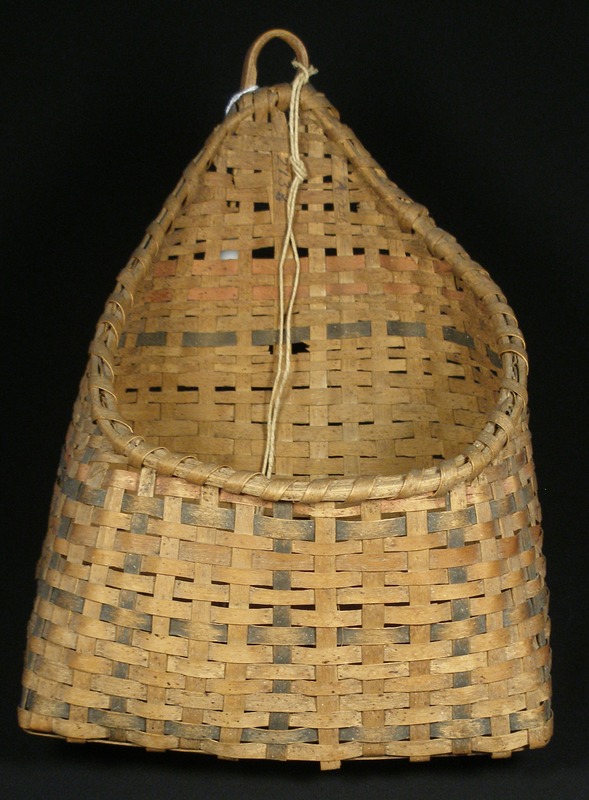 Why include baskets in an online archive dedicated to the writing of American Indians in New England? As baskets serve a communicative purpose through their materials, designs, and functions, baskets fit perfectly into what is conventionally known as literature. In Queequeg's Coffin, Brigit Brander Rasmussen writes about the origin of the word text: text derives from "the latin word 'textere,' which literally means 'that which is woven'" (Rasmussen 70). Words are 'woven' to express feelings, traditions, hard work, and to create a link to the person interacting with the object. Ash splints are woven into baskets to accomplish much the same thing with the added bonus of a physical function: "Baskets were traditionally made for exchange between close family members and friends to solidify and maintain important social relationships" (Memorial Hall). In other words, the purpose of baskets is more than purely functional. Much like letters, they serve as a way to reaffirm personal bonds between people. Relationships are not formed solely with words but through actions, gifts, and shared experiences and baskets can represent all three. Baskets can also tell stories through the designs present on the ash splints.

This section is specially dedicated to the Abenaki people of New Hampshire. And, like so much of their basketmaking, it is a collaborative effort. It began in the Summer of 2011, with events and "real" exhibits produced by the Mt. Kearsarge Indian Museum, the Hopkinton Historical Society, and the Warner Historical Society, in cooperation with Abenaki basketmakers. In 2012, students at the University of New Hampshire began working with all these partners to upload images of the basket and write the short interpretive essays you see here.

This archive considers baskets as important examples of Native literacy. By challenging narrower definitions of "literature," baskets help us fill in the gaps of regional indigenous history and cultural production. As one scholar, Stephanie Fitzgerald, has explained, “The decoding of the text of a basket requires shifting from a Western to a Native perspective and situating both the basket and its text within a specific tribal context.”

Traditionally, baskets were made to carry possessions and store food. The process of of making them was an extremely social one, as basketmakers (often women) did their weaving in groups, sharing traditional stories while they worked. This aspect of social relations is precisely what makes baskets a vital part of Native American literature: baskets served as communicative devices, much like what is more conventionally considered “literature”.

Unlike many Western literary works, however, these baskets serve as communal, rather than individual, works; they tell the story of whole tribes versus individual Native people.  It is no surprise that many of them include designs that speak to these communal stories. Many of the baskets in this exhibit include paintings and symbolic figures. Even the weaving itself can be viewed as a text, because the way a basket was made often signified its purpose or symbolic meaning. Fitzgerald emphasizes that  “together, the symbols and designs of the basket text create a narrative for the reader to decode.”

The essays in this section "decode" the baskets by situating them in history. For example, we chart how some Abenaki people came to make and sell their baskets in order to earn an income to support their families. However, as scholars like Ruth Phillips have shown, this does not diminish the meaning or significance of baskets and other material productions.  Rather, these changes should be seen as unquestionable evidence that Native American New England was not destroyed or disbanded upon European arrival.

These baskets are solid proof of indigenous survival and of the will to preserve Native culture and traditions despite oppression and hardships.In the end, this exhibit aims to educate the public about the true story of Native New England through the histories provided by these wonderful and unique, tactile pieces of Indigenous literature.