The June 1980 issue of the Wabanaki Alliance covers many important topics, such as Native child welfare, a woman's ordeal with suicide, local poetry, and a local worker's ordeal as an ally of people in need. Some of these are major issues for the Native community, and as such they take up a greater amount of space in the paper than the rest of the stories.

One article, entitled “Child Welfare Ultimately Left Up To Indian People,” talks about the the Indian Child Welfare Act of 1978. This legislation was a major stepping stone for the Native people of Maine. It states that Indian children in foster care will be placed with a member of their family as a first priority, or with a member of their tribe as a secondary priority, and with another indian family as a third priority. Only as a ‘last resort’ will this child be given up to a non-Indian family. The Act tried to ensure that Native peoples could maintain their cultural influence on their children, as well as making sure the culture of these tribes stay alive within each new generation, as opposed to the “pencil genocide” that had been the policy of North American governments since the birth of the colonial period.

This newspaper also includes many advertisements typically found in newspapers, but clearly targeted for a Native American population. One large ad for “Cheryl's Place” states that “There is a 10% discount for Native Americans” if they bring identification, and promises to donate “One dollar to the Wabanaki Alliance” for every purchase of five dollars or more at the store. There are also more mentions of Indian-owned shops such as gun stores and totem pole sales, as well as many job opportunities being offered by the people advertising these products in the paper.

The article “An Indian Woman’s Ordeal With Suicide” is a personal story of a Penobscot woman who attempted to take her life. She grew up with family violence as well as constant criticism from her classmates for being Native American. After recovering from her attempt she began the process of healing. Finally, the opinion piece, “An Outreach Worker An Ally Of People In Need,” speaks about an outreach worker's effect on the Native people of Aroostook County, and about helping to combat the loneliness that comes along with living in Aroostook County. This article mentions the many services that an outreach worker provides, such as aid for those with addictions, outreach to lonely mothers, and dealing with other companies and such on behalf of the people of Aroostook County.

Used in consultation with Steven Cartwright, editor of the Wabanaki Alliance 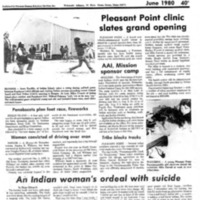