We do not think of baskets in a practical way anymore; they are mostly decorative art. If we need a durable container for large dry goods, we are likely to use a plastic bin. Starting in the 1930s, galvanized bushel baskets and pails, made by machine in vast numbers, were the universal carry-alls,  ("Newton Washburn"). Before that, the universal container was the wooden basket. A sturdy, durable container, it was, pound for pound, much stronger than galvanized steel, and in some ways more durable. In fact, baskets retard spoilage by providing controlled ventilation and are still heavily used for harvesting and storing apples and other produce (Congdon).

In upper Vermont, the Sweetser family made many, if not most, of the baskets sold commercially (Linzee 25). The family originated in the early 1800′s by the marriage of a German immigrant basket-maker to a basket-maker from Odanak, Canada ("Newton Washburn"). By the 1920′s, there were over a hundred family members making baskets in a small area between Stowe and Lamoille, Vermont (Eaton 51). They sold their products all over upper Vermont and their brown-ash baskets were unusually sturdy, with a hybrid vigor from the marriage of Abenaki and European designs.

Born into the Sweetser extended family in 1915, Newt Washburn grew up making baskets; it was his family’s winter occupation. They made “bushel baskets… egg baskets, apron baskets, laundry, feather, berry, bike, and pack baskets … baskets for every need, even baby cradles and fishing creels” (Linzee 25). It was a communal activity, with families often getting together for basketmaking parties. But their Abenaki heritage was a family secret: “It was frowned on. If anyone knew, I wouldn’t be able to play with the other kids and the neighbors wouldn’t let me in their houses to play” (Colquhoun).

Secrecy about their heritage was not unusual. Arthur Sweetser, a basketmaker working in the late 1940’s, explained that one day when his grandfather brought his grandmother “into a store with him [to trade baskets for goods] … he introduced her as ‘my squaw.’ [His] Grandmother was so mad she didn’t make any baskets for a couple of years” (Eaton 51).

By the mid-30′s, the market for baskets greatly diminished, displaced by all manner of modern containers. By the end of World War II, with the need to find other work, the Sweetser community was largely dispersed (Colquhoun). After serving in the war, Washburn moved to Bethlehem, NH, where he worked repairing auto bodies, shaping steel instead of wood ("Newton Washburn"). He was forced to retire by two heart attacks in the early 1970′s ("Newton Washburn").

I came home from my last heart attack. That’s the day I started. I don’t know how many years I’d lived here then, but I went down back on my own land, leaning against a tree, watching the river. Something told me to look at the tree. I stepped back and looked. It was a brown ash tree growing on the river bank… That night I had a basket made. And I haven’t stopped since. (Linzee 26)

While recuperating, Washburn found himself drawn back to his family’s heritage and craft (26). It was the beginning of the Abenaki renaissance in New England, which caused a growing interest in baskets (Berolzheimer). Working out of a small workshop at his house in Bethlehem, NH, “Silent Bear” made baskets for more than twenty-five years (26). He was the last basket-maker still working who was part of the earlier, utilitarian cottage industry where he learned his craft (26). His baskets are beautiful examples of a highly refined, utilitarian design that leaps from craft to art. He continued to innovate within his tradition, as with his signature combination of an “Abenaki star” basket bottom with a concave “demijohn” bottom, which greatly strengthens the basket (26).

As his ability to practice his craft diminished with age, Washburn’s scope of concern widened to the sustainability of his people and his craft. The Sweetsers had always kept their craft within the family but as the last holder of the tradition, Washburn realized that it would be lost if he did not teach others ("Newton Washburn"). To continue the tradition, Washburn taught at pow-wows and at schools. He mentored more than eighty apprentices, many or most of them Abenaki, including Sherry and Bill Gould ("Western Abenaki Baskets"). His apprentices have gone on to teach others through apprenticeships, events, and writings.

Newt Washburn died in 2011. Like the basket spokes we see radiating from that exuberant signature, those he taught are the framework of a lasting, universal container of his legacy – a basket made of people of the ash, carrying the craft of his ancestors onto the uncertain waters of the future. 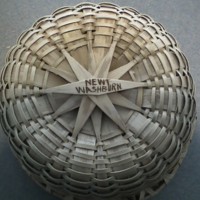 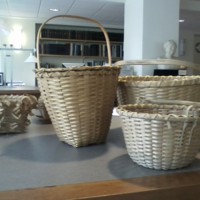 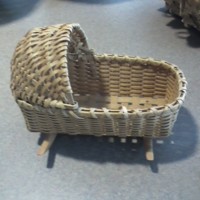 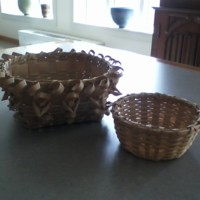